On a City Released

It’s been a tough week for Boston. For me, Monday was a series of close calls – and for some, unfortunately, a little too close. By the end of the week, Boston had just begun to return to normality. On Thursday night, I went to sleep blissfully unaware of what was transpiring across town. Friday was an early start, dictated by a conference call with Ireland. As I’d gotten into the habit of this week, after waking I checked my Twitter timeline to see if anything had transpired in the past 8 hours.

There had been a shootout only a few miles across town. The public transport network, the T was shut, something unprecedented outside of winter storms.  Citizens were told to “Shelter in Place”, a decree usually reserved for chemical attacks. People were told not to go to work, or if they were already there, to stay put. The first suspect was dead, and so was, tragically, an MIT police officer. Boston was in lockdown.

I’ve never been in a scenario where I’m instructed not to leave my home – it’s a completely foreign concept. The only insight into the outside world is a stream of Twitter photos that show Boston as a ghost town, as the manhunt for the last remaining suspect continues in Watertown. There were still scatterings of pedestrians and vehicles on the street, but nothing like the usual thoroughfare I’ve come to expect living in the financial district.

By 6pm, the “Shelter in Place” warning was lifted. By this time, taxis had once again started service. Most stranded commuters had made their way home, and wandering across the financial district and through Boston Common, there really was nobody about. Some signs of life were to be seen in the Italian quarter, the North End. People were dining out, palpably relieved after a day housebound. It was around this time I overheard reports the second suspect had been located. After an hour or two’s interesting police radio chatter, the suspect was in custody.

After a day tracking the news, it was time to switch off from the story. On returning a few hours later, I learnt of a party of Northeastern University students making their way along Commonwealth Ave. toward Boston Common. This I had to see.

It was 11pm. Rounding the corner from a deserted Downtown Crossing onto Boston Common, a low rumble of the crowd could be heard. Making my way closer, it became apparent the bandstand had been repurposed for the celebrations.
This was the same location of last Tuesday’s candlelit vigil,  a sullen somber occasion. Not so tonight. 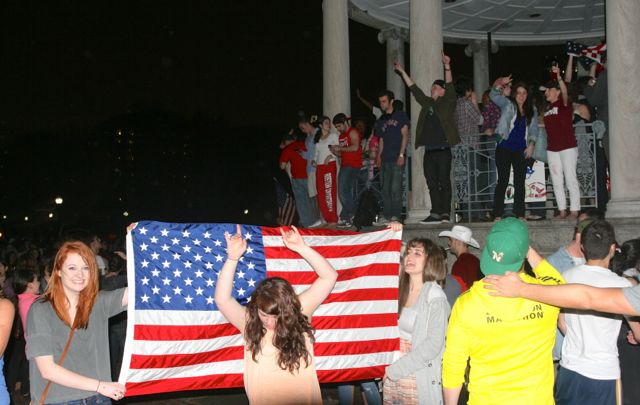 The mood was ecstatic. The elation of the people of Boston was a tangible, electric force. The crowd chanted: “USA, USA, USA”, “Boston, Boston, Boston”, and spontaneous sing-alongs of the now ubiquitous “Sweet Caroline”. The crowd even expressed some appreciation, chanting “BPD, BPD, BPD” – Boston Police Department.
BPD looked on, clearly bemused by the revelry of the students and the stream of handshakes and high fives, but intent on not interfering in their fun.

Why would they? The crowd was a group of harmless 20-something students, celebrating Boston’s victory. The celebration was jubilant, but at no point threatening. There was no profanity in the crowd’s chants, no religious finger pointing. In the crowd were women in headscarves, people in wheelchairs, even children. Obama’s calls for tolerance in tonight’s address are being well heeded.

It’s a warm, humid night here in Boston. A thunderstorm has just broken out, but the party on the common continues. Boston remains the same safe city it’s always been. It’s an incredible relief this week is over, and now that Boston has been released, hopefully the city returns to normality once again.