On America & the Great Outdoors

Middlesex Fells Today, I hiked Middlesex Fells reservation. Or at least, I think I hiked. I’d rather consider it an 18km casual meander. When not clad in the latest of gore-tex and titanium North Face, I’d feel a bit of an impostor calling the activity hiking.
It was nice to see the wilderness the Boston Area has to offer, and in the latest of my “Observations of Paddy Irishman” series, here’s some thoughts.

America – land of the free.

No Swimming Or at least, within the 3ft width of the trail. Stray outside, and you’re trespassing. While it’d be unfair to judge an entire nation’s attitude on experiences in one state park, until I’ve had a contradictory experience, that’s exactly what I’m going to do.

Building a reservation around a series of reservoirs is always going to have some drawbacks. By their very nature – deep stores of water, they have inherent dangerous. 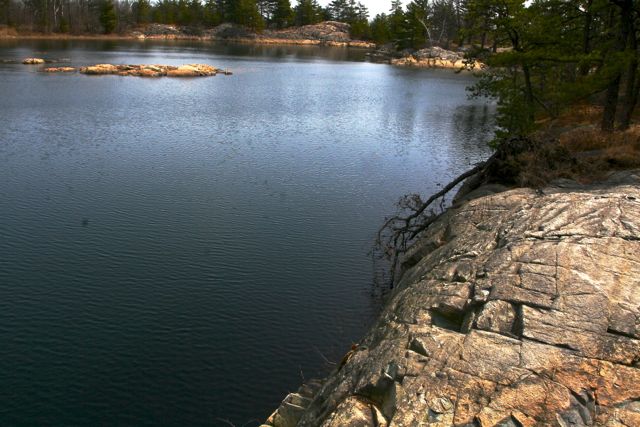 Tell me this isn’t made to be jumped from There are often unpredictable currents, waterborne algae and difficulties in exiting the water. I’ve swam in a number of reservoirs, both in Ireland and continental Europe. Often there are restrictions on swimming. It’s unfortunate, as I like to think of reservoirs as geology taking an exercise in sociology.
“Hey, shale, you know what’d be awesome? If we made a super deep lake, then a kick-ass platform for humans to jump from?”
But, I digress…

The conservation area is a glorious 2500 acre state park set in gentle hills. It’s pristine – the water of Spot Pond is crystal clear, and there isn’t a piece of litter in sight. Credit where it’s due, it’s a better managed public amenity than what we’re used to seeing in Ireland.

The Fence When it comes to the highlight of the park, however, the glorious Fells Reservoir, things get a little strange.
It begins with a fence, which seems to stretch the entire perimeter of the reservoir. At first, I’d thought it was to keep wildlife out – but that doesn’t quite explain the razor wire sitting on top, something that mightn’t seem too out of place in Dachau.

Big Brother is Watching It gets worse – the trail continues inside the fence, but the inside circumference of the lake is dotted with small black poles marking the boundary. Past this line toward the shore, you’re trespassing.
Want a closer look? Sorry.
Great photo opportunity? Nope.
I can’t help but think in the presence of a park officer, they’d actually take this seriously, too. Coming closer to some form of water treatment plant, things get stranger still. A series of CCTV cameras are mounted in the middle of the wilderness mounted on top of high poles.  It’s Liberty meets Orwell.

Travelling to the eastern half of the reservation (which is, unfortunately, bisected north-south by the I93 highway), the land immediately bordering the reservoir is marked ‘Reservoir Property – No Access – Fines Apply’. The border is dotted with yellow warning signs threatening prosecution.
While I realise providing the public with access to the water supply of the city has a whole host of national security threats, I can’t help but wonder if a terrorist engaged in the act of biological warfare would be deterred by a few signs.

America – land of the brave.

Fells Reservoir Thankfully, nobody seems to pay the blindest bit of notice to the various warnings. The black poles bordering the Fells Reservoir I paid no attention to. The rocky outcrops around the water present too many photo opportunities, and nobody else seemed to pay much attention. Similar acts of brazen defiance were to be found around the eastern half of the South and Middle reservoir, with people walking along the shore undeterred by the threat of prosecution and fines.
Land of the free, indeed!

Considering the entire reservation, the complaint is minor. While I understand the thought behind limiting access to the reservoir, I’m glad to see the public proactively treat these rules with such disdain. I look forward to doing the same on future visits!