On Being Irish in Boston - Time to Reinvent Our Identity?

Irish Flag hanging in Rowes Wharf Never before have I experienced such heartwarming adoration for the Irish as the past week in Boston. Everybody here is Irish for Paddy’s Day. The entire city turns green, and Boston undertakes Paddy’s with more gusto and vigor than even Dublin itself.

Now the streets are finally once again clear of all things green, I’ve had the chance to reflect on the significance of hailing from this small parcel of land off the West Coast of Europe.

It’s a well-known fact that Americans love the Irish. Having traveled a few US cities, this has held some truth. There’s a certain degree of excitement upon introducing yourself as Irish.
In Boston, this excitement reaches near-ecstatic levels. Perhaps being a 6ft tall, red-haired, blue-eyed walking stereotype helps, but as the city with the highest Irish population, I was surprised to learn the novelty hadn’t worn thin. There’s a clear distinction between ancestry and nationality. 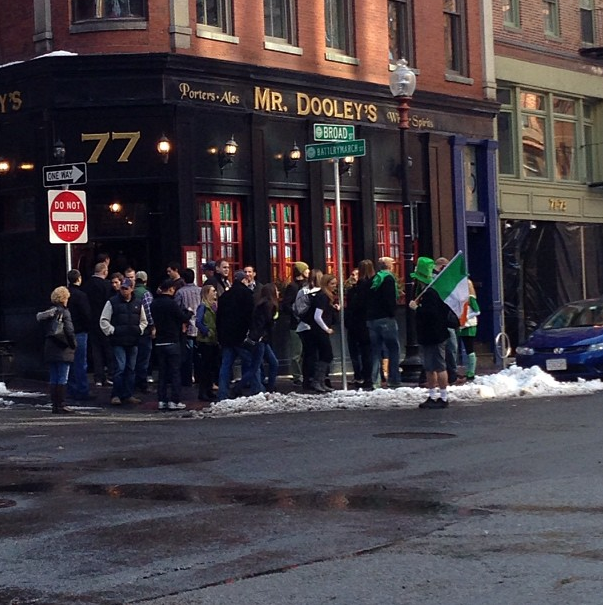 Irish Pub Crawl – one week before Paddy’s Day! Introduce yourself as Irish, and be greeted with chorus of “Oh, me too!”
However, upon learning you’ve just moved here from Ireland (and thus “actually Irish”), the tone changes dramatically. This bold claim of Irish descent is retracted, replaced with an apologetic “Well, part-Irish”.
Why so apologetic?

During our infamous boom years, when Ireland was a supposed economic powerhouse, we became a little self righteous of our nationality. We’d lambast “silly Americans” for their obsession with Irish Ancestry. To be Irish was a boolean identity – true or false, with little room for debate. Born in Ireland? Irish. Not? American. We were all once guilty of this casual arrogance.

Fast forward a few years, and Ireland is left on the brink of economic ruin. We’ve rapidly changed our tune, with initiatives such as “The Gathering” encouraging one and all to reclaim their Irish roots. Obama claims Irish heritage, and is welcomed open armed in doing so.

Since moving here, and seeing firsthand this apologetic nature of an American-Irish’s claim to ancestry, I can’t help but feel a little shame for our attitudes of past. So many are proud to identify with Ireland, its culture, heritage and nationality. This flattering behavior is to be welcomed, but before doing so, it’s time to curb the definition of what it means to be Irish.

Paddy’s Day in Boston is a drunken escapade. It’s not much different from the celebration on home turf, however herein lies a problem. This is the only day where Irish Americans get to express and celebrate their Irish heritage, and a whole plethora of age-old cliché’s are revealed.
“Do you guys have Internet?” (Yes)
“What, you guys have cellphones?” (Yes)
There seems to be genuine surprise on learning that we’re a nation with an advanced telecommunications infrastructure, a growing motorway network and a university educated population. While I’m cautious to compare our national identity with that of a corporate brand, perhaps it’s high time we re-invented ourselves.

Green Beer – Blasphemous! Having grown up in Ireland, I know a large part of what defines us is these shared experiences that we’ve encountered as part of being Irish. Everything from the significance of a bag of Tayto and a can of Club Orange to the theory of “Be Grand” ™.
It’s something which is quite difficult to communicate – but we can at least try.
It’s time to step out of our comfort zone. Let’s move away from such classic hits as Leprechauns, “getting wasted”, and my personal favourite, that awful toxic shade of green that constitutes the first segment of our flag.

There’s an abundance of traits that meld the identity of a modern Ireland. The Irish music scene is renowned the world over, from stadium-filling power houses to small Indie bands. Ireland is home to a plethora of authors, from streaming conscious thought around 1900’s Dublin to simplistic portraits of the harsh life of a remote Kerry Island. We have a rich literary history worth celebrating.
Our native tongue intrigues linguistic scholars the world over. While no doubt a struggling minority language, what’s left of it is worth celebrating.

We’re an enterprising nation, too. Ireland is home to a multitude of technology success stories past and present, with plenty more coming to fruition. The success of Irish craft industries can be seen on the shelves of supermarkets throughout the country.

These qualities are our greatest exports, and it’s these traits that should define a modern Ireland, not the “plastic Paddy” platitudes of past.
While Political junkets to far-flung cities serve their purpose in advancing the political influence of Ireland’s government, they do nothing to shape the average American’s definition of Ireland.

Paddy’s Day could be much more than a parade. Why aren’t we using it as a platform to reinforce our unique stronghold here in the US? This platform could be a unique opportunity for producers of Irish artisan products to tease the viability of the US exports market. It could also serve as the Launchpad for Irish music artists looking to land their first US tour, and showcase the exciting work of Ireland’s technology and high science industries.

Overhanging this entire discussion is the question of if we deserve redemption from our attitudes of past. When we once casually dismissed the Irish American claim to heritage, can we with any degree of sincerity try again to encourage it? Have our attitudes only changed because it’s economically convenient for us?
Regardless of the stimulus for this change, there’s an abundance of people who are still proud to identify as Irish American, and we’re finally willing to change our tune.
Plus – reality is, we’ll probably get away with it. It’ll be grand, sure…