I recently had the good fortune to spend two weeks in Australia on business. United’s fleet of new Boeing Dreamliners (my second 787 flight in the last few months) made for a relatively comfortable Sunday night 14 hour flight from SFO, all things considered. The flight was a red-eye, with wheels down in Sydney at 7am Tuesday (yes, Tuesday) morning - damned international date line. The taxi trip into the city was through morning rush hour, but it did afford some brief views of the city, and I liked what I saw. Sandstone fronted buildings, rows of victorian-esque apartments and modern skyscrapers all vying for architectural precedence. I arrived at the hotel with time for a quick shower before a very jet-lagged first 10am meeting. The day of meetings ended, I took a stroll around “The Rocks”, the district under the Harbour Bridge I was staying in - a fantastic neighbourhood of old buildings and mid-upmarket restaurants. 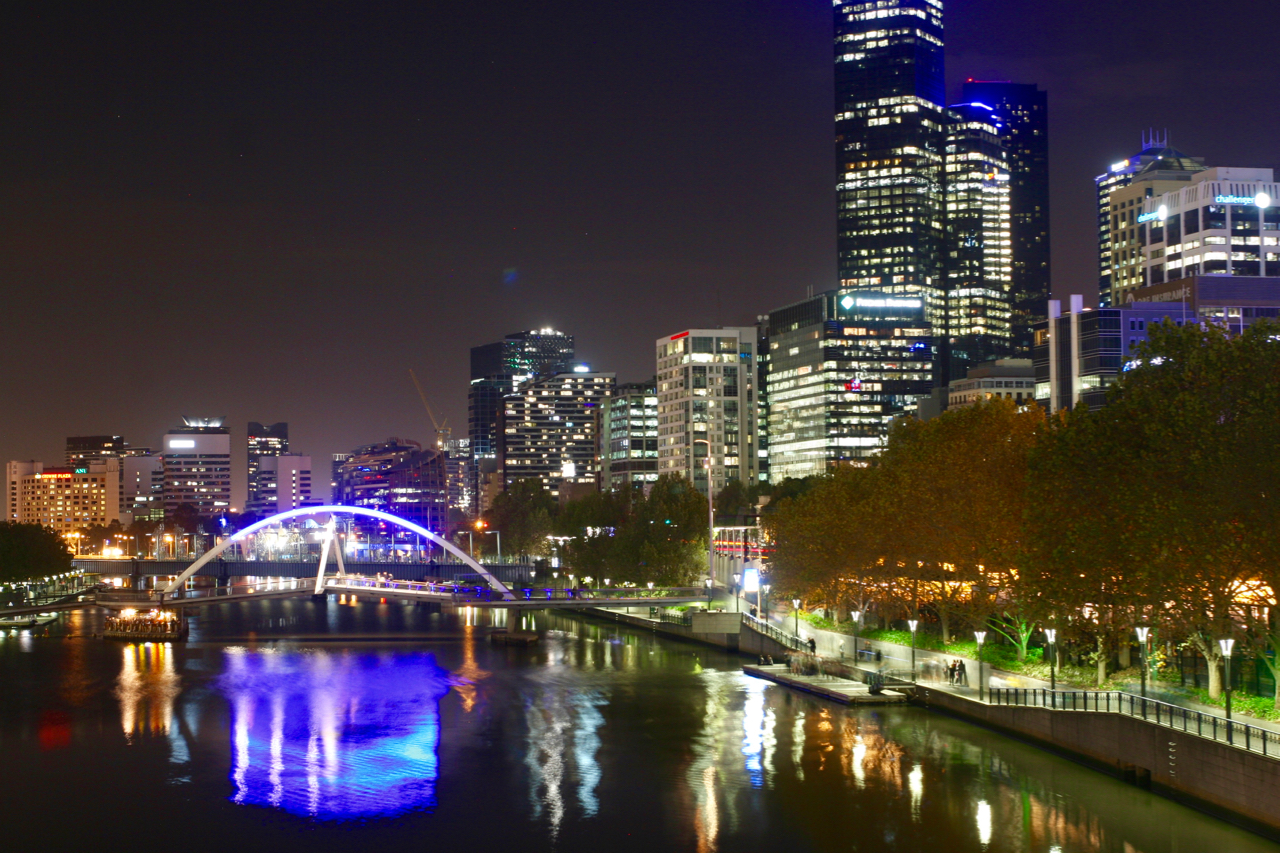 *Melbourne Skyline* Wednesday saw us flying to Melbourne for some more meetings, and I hadn’t yet formed much of an opinion of Sydney. At first, staying opposite the train station in a bit of a dumpy hotel had biased my opinion of the city - but after a few evenings walking about, I got a better feel for Melbourne. The defining geographical feature of the city is the river flowing through, with a bike trail extending for miles (reminiscent of the Charles in Boston) which I’ll have to explore next time. The views from the top of Eureka Tower were spectacular, well worth the AUD$20 entry fee. The river-front development of the city is very well planned - it’s like an urban planner’s perfectly executed oasis. 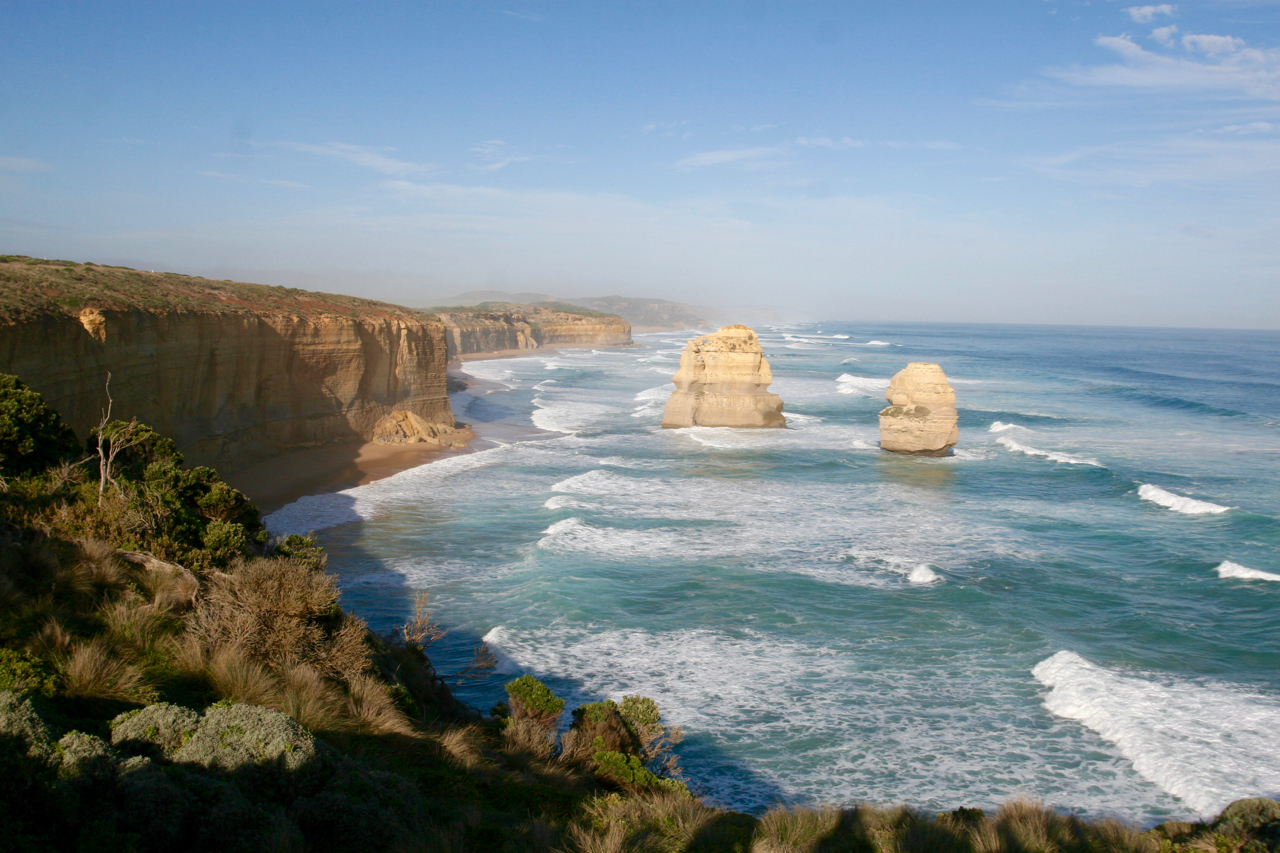 *Great Ocean Road* After 3 nights in Melbourne, it was the weekend. I was renting a car, and spending it on the Great Ocean Road. This coastal drive was top of my list of things to do in Australia, and I was very pleased to find it was driving distance from Melbourne. The scenery is spectacular as the road curves around miles of almost empty sandy beaches, punctuated by small clusters of neoprene suited surfers. 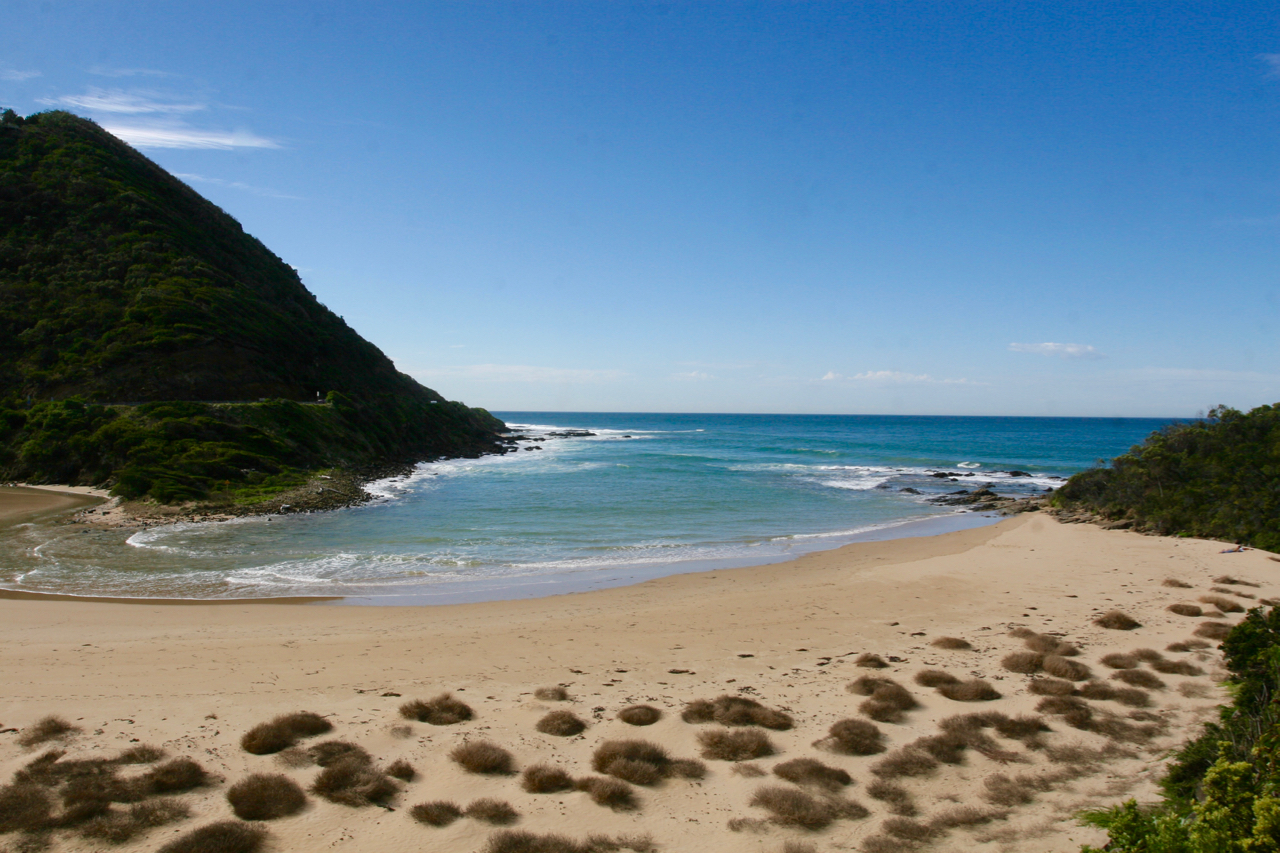 Lunch was in the coastal town of Apollo Bay, which had a nice stretch of coast, and a small working port. From there, it was on to the Twelve Apostles - an impressive vista, although admittedly also slightly underwhelming. Pales in comparison to the Cliffs of Moher or Big Sur (which I had visited just the previous week). Next time, I’d do the Great Ocean Road again, but consider skipping the lengthy trek out to Twelve Apostles. 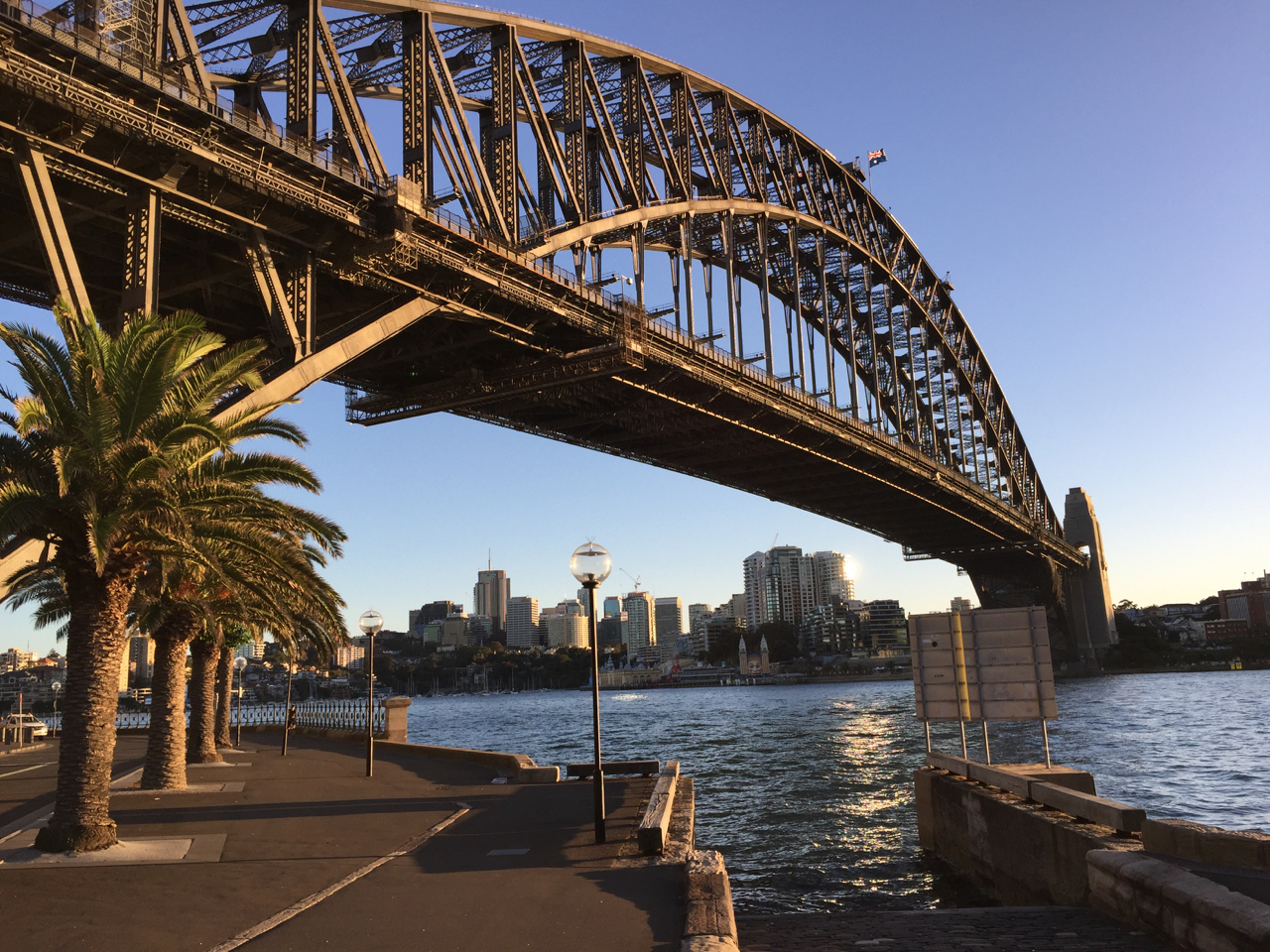 *Sydney Harbour* After returning from Melbourne, I was spending another 5 nights in Sydney while delivering a Red Hat Mobile training course. Every evening was free to explore the city, however, and I walked as much of the city as I could. The “winter” climate made for comfortable daytime temperatures, and even relatively balmy evenings. Walking along the water brought me to the Opera House, which I'll be filing under: "things I expected to be disappointing in person, but then weren’t". This waterfront path then leads to a beautiful park, the tip of which is Macquarie's Chair. From here, the sunset view is spectacular, cascading golden light over the Opera House and Harbour Bridge.

If the river is the defining geographic feature of Melbourne, for Sydney it’s the harbour. In Sydney, water is everywhere you look - and with good reason, since it is the world’s largest natural harbour. Residences (..at least, the nicer ones!) are based around the water, with many waterfront properties having a boat moored outside, some with private docks. Manly Salt Water Pool On my last night in Sydney, I hopped on the Manly Fast Ferry. It’s a Friday night, approaching winter, yet there’s people on the beach, surfers in the water, cyclists and runners on the coastal paths - there’s a lot to be said for climate! It was this same Coastal Path that sealed the deal for me - it lead to the most beautiful public saltwater pool overlooking the bay, and a picturesque sandy cove. I enjoyed the path so much, I returned the day before flying out to swim. I was warned that it’d be “a bit nippy” without a wetsuit, but felt just fine to me! At least there was less worry of death-inducing jellyfish, being late season. The reef in the cove is part of a marine reserve, so there was an incredible amount of underwater life to observe considering how close this was to two very busy beaches. My Manly evening swim was the real highlight of the trip. (At this point, it’s worth pointing out Manly is the name of a place, and not an attempt to assert masculinity)

At this point, it’s worth digressing to discuss the food scene. As two cities which constantly top rankings for “liveability”, I had expected great things. While I’m still not sure if I was just unlucky, or not forking out enough $, but I was reliably disappointed at almost every turn.

Harrys Cafe de Wheels, Sydney: Pies like you’d pick up at any service station in Europe. Reasonable prices, however an institution worth skipping. Meat and Wine Company, Melbourne: Distinctly un-memorable. The steak was slightly sub-par around the table, despite charging high-end steakhouse prices. Rump and Ribs, Manly: All the ambience of a school cafeteria, albeit with better views. Poor bar menu, disappointing appetiser, but a great filet steak.
Glenmore Hotel, The Rocks, Sydney: Come for the drinks, skip the food all around.

Chin Chin, Melbourne: Best meal I’ve had in some time. Best Short Rib I’ve ever had. Exceptional stuff. The Boathouse, Manly: A constantly packed beachfront restaurant - the only one this end of the coast walk in Manly. I had low expectations, but my humble burger & chips were fantastic (AU$19). Every other dish looked equally as good (if a little pricier), and great views to boot! Pony, The Rocks, Sydney: Unimaginatively presented chorizo appetiser, but a fantastic main. Other options on the menu also looked promising. Service was a bit crap. ..that’s all I could come up with after 2 weeks. The beer scene is similarly bleak, with craft beer in what appears to be its infancy. Here’s hoping this develops into something more, and my culinary experiences were just bad luck! 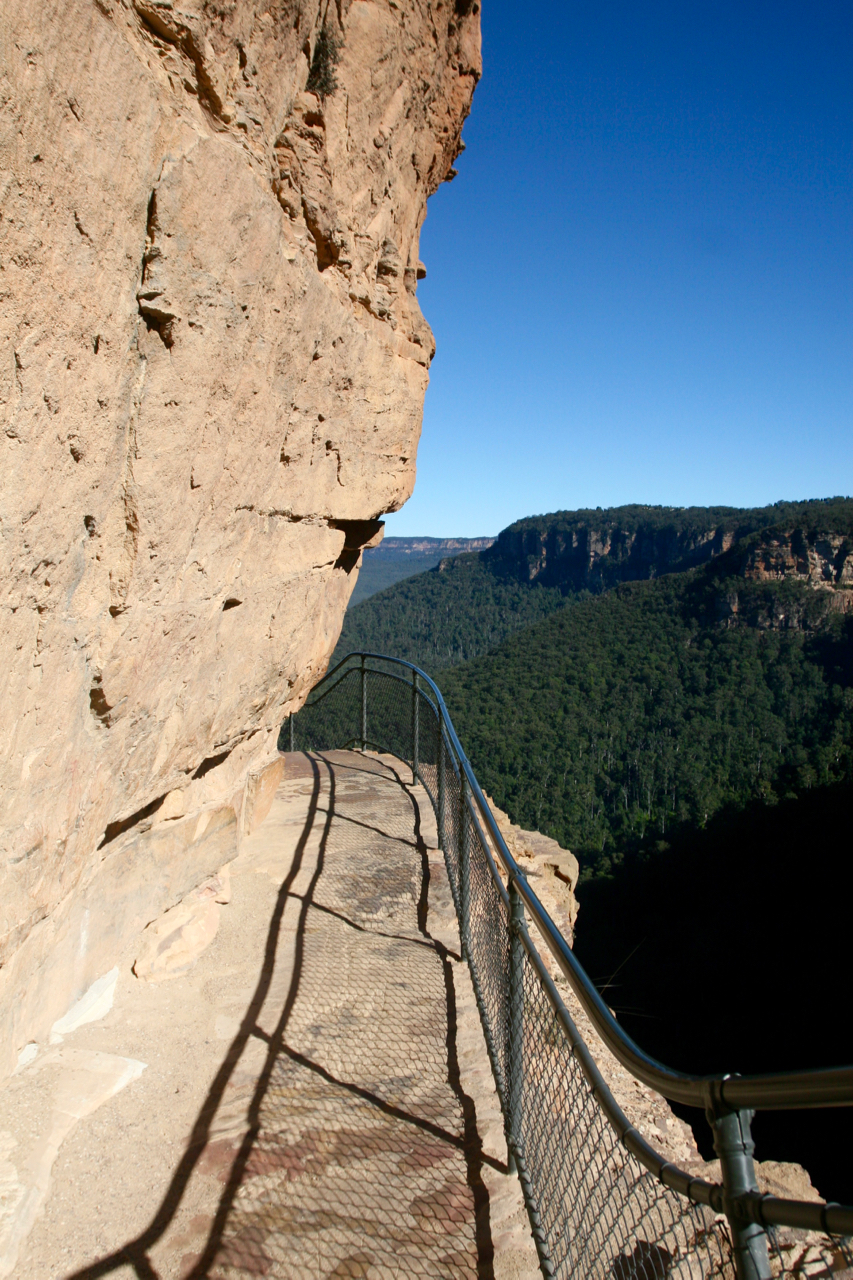 *Hiking in the Blue Mountains* After a week working in Sydney, I was off to rent another car, and explore the Blue Mountains. This revealed a landscape I didn’t know Australia to have - lush green forest, and spectacular cliffs. The hiking paths (or “Bush Walking” in local parlance) around this region often consist of well-maintained steps etched into the side of cliffs, making for tough ascents but spectacular views. To be avoided if one has any fear of heights! On the approach to Jenolan Caves, I saw my first Kangaroo of the trip, which excited me an unreasonable amount. Jenolan is by far the most impressive cave system I’ve seen. The self-guided (..free!) tour lead through an impressive cave, but the paid tour of the larger Lucas Cave was the real highlight. The tallest chamber is revealed with great fanfare using a well orchestrated light show. It’s also in the caves that I'm left wishing we could regress technologically by a few decades - the majesty was somewhat spoiled by obnoxious tourists touting their selfie-stick appendages, complete with LED strobe flash lighting.

Before travelling, I was repeatedly assured I’d prefer Melbourne, or that it was the “better city to live in”. While I thought very highly of both, Sydney was definitely my favourite city to visit. To live in? Hard to say - I could see the higher cost of Sydney living being a difficult pill to swallow, but the beauty of the Harbour is unrivalled. Australia as a country to visit certainly beat my expectations. It had never been particularly high on my list of places I’d like to go next, a mistake in retrospect! I’d gladly go back.