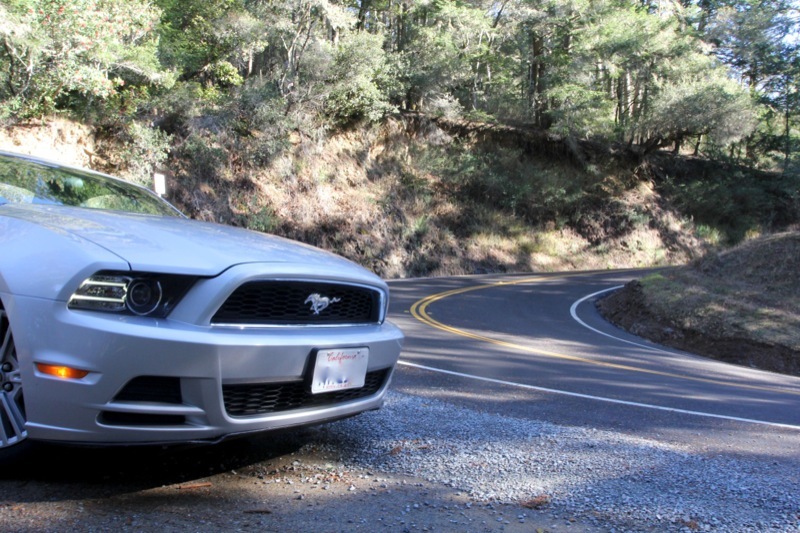 Mustang V6 The quintessential debate – Ford Mustang or Chevrolet Camaro – that’s a question I had the lucky chance to address over the course of a weekend in San Francisco recently, by a rare stroke of luck. Arriving into SFO, I’d intended on purchasing a cheap upgrade to make the weekend’s driving up and down US #1 more fun – the base Mustang coupe was available for a very reasonable $15/day, so I decided to go with this. 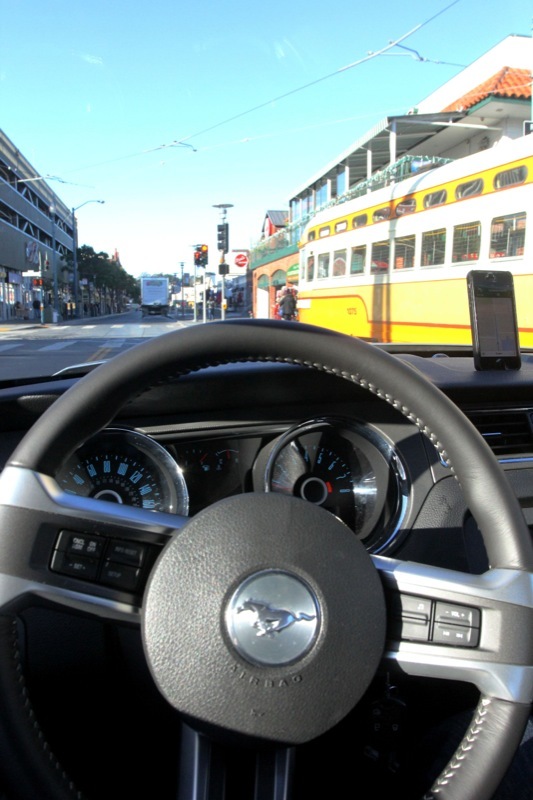 Mustang Interior I’ve written previously some thoughts on the Mustang from my experience test driving the GT version.  The rental was the face lifted 2012 model, this time in the more economical V6 spec. The V6 was impressively powerful for what in the world of a muscle car is considered low output. 0-60 comes up in a thoroughly respectable 5.3s. The transmission in the rental was of course automatic, and unsurprisingly it was a disappointment. There’s a “Sport shift” mode, which allows a manual override, but no steering wheel paddles, so shifting is an awkward reach for a small toggle button. In automatic sport shift, the car cluelessly hunts for gears and holds at inappropriate times. The suspension in the non-GT flavor, although comfortable, was far from sporty. It wafted and tumbled through corners, rather than gripping through the apexes. The interior has some of the throwback muscle-car-of-past charm, which strangely works. My previous comments about the ergonomics of the wheel carry over from the GT car, and the interior does certainly feels a far stretch from luxurious – but it’s worth considering what this car is: cheap. The V6 Mustang has a base price of $22k, and that’s a lot of car for so little. I had fantastic fun driving the car along the cliffs of the California coast, it proved a worthy travel partner. The other interesting thing about the mustang is it’s accessible. It’s an automatic – so the unwashed masses here in the states can drive it. The accelerator pedal doesn’t require sensitive input – throttle is gentle, and the car needs to be worked in the rev band to really move at pace. The suspension doesn’t crash and bump, meaning no correction is needed in turns. It doesn’t take a racecar driver to master. A consequence of this is more enthusiastic drivers bore quickly – but there’s no taking away from the fun factor these cars provide. Then the Mustang broke down. Power steering died, and then ABS. Thankfully, this happened just a block away from where I was staying, but on a hill. The recovery truck came, took the car away, and then onwards to SFO for a replacement.

Hertz were very apologetic, and pretty soon I was leaving with an upgraded replacement – they gave me a Chevrolet Camero SS Convertible. The SS is the competitor to the Mustang GT, a more exciting offering than the base car. Although I only had the Camaro for some commuting around the Silicon Valley, the least I could do was take the time one evening to go for a gentle drive through the hills. The Camaro is a fast car – on par with the GT Mustang, with quoted 0-60 times of 4.5s. My daily driver back in Boston is an M3, which is no slouch – but despite the Camaro‘s 1-second gains, at no point was I left with a sense of jaw dropping acceleration. 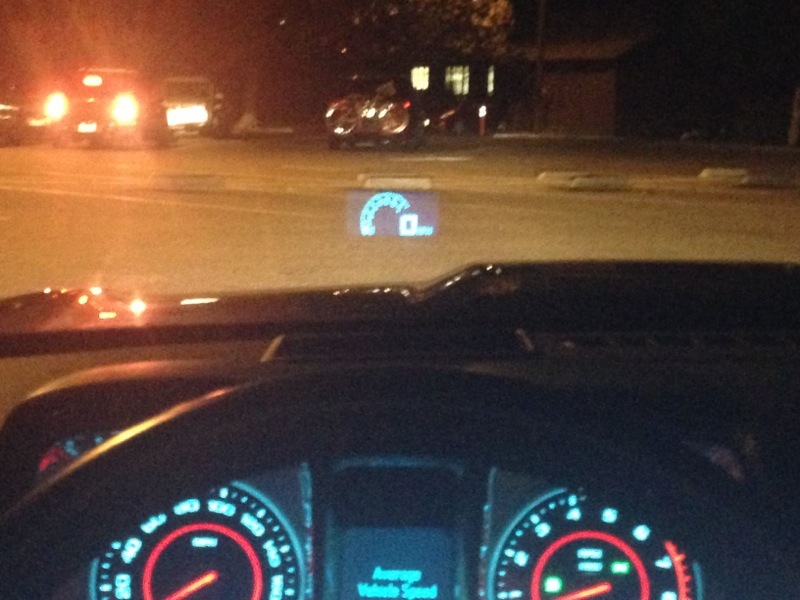 Camaro HUD It also sounds the part. The V8 growl is fun at first, but I quickly tired of the noise – finding it lacked any real character. The automatic gearbox was just about tolerable; paddles are on the wheel even if shifts are sluggish. The suspension is sporting and hardened as one would suspect, but the size of the car is noticeable in the bends, it’s a heavy beast. This model was spec’d with an entertainment system that included USB connectivity – an excellent bonus. Also featured was a dashboard HUD which projects speed and RPM onto the windscreen, not a new technology but the novelty of driving a car with this was fantastic. The electronics & load-out was comprehensive, and some googling revealed this was the 2SS model, with a pretty reasonable sounding base price of $33k. 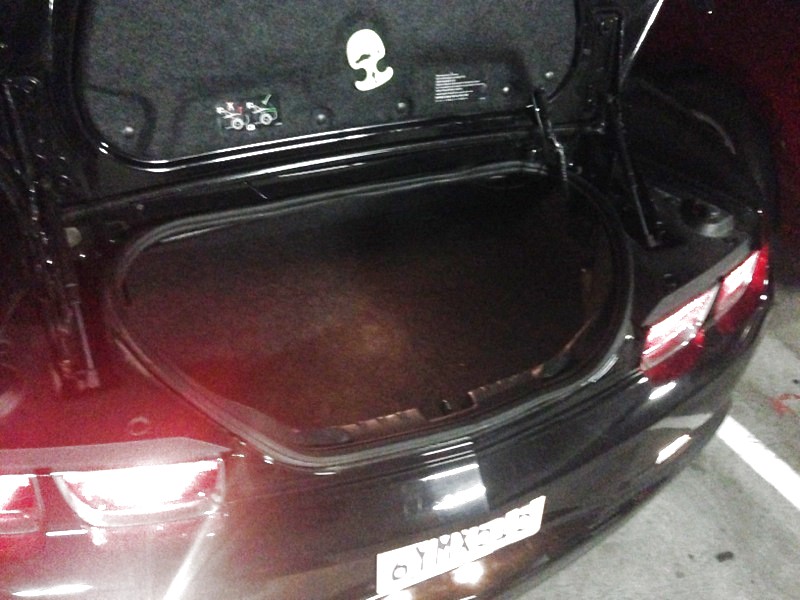 Camaro Boot Some practicalities – the boot (a.k.a. “trunk”) is a prime example of some woeful engineering – it barely fits my laptop bag. The interior quality of finish feels noticeably worse than the Mustang. Because of the design of the car, the viewport granted through all windows is tiny, including the front windscreen. The pillars are huge and limit visibility, making maneuvering in tight spaces unpleasant. Then there’s the bigger issue – the elephant in the room. The aesthetics of the car are hideous. The exterior is hideous, vulgar and a little obnoxious – even in a subtle shade of black. The interior is no better. A collection of engine information such as oil pressure and temperature are positioned at the bottom of the center console, obscured from view for all but midgets. A blue strip LED illuminates the door panels, which are covered in a panel of shiny black plastic. It feels less like a car cabin, and more like a Las Vegas strip joint, and not the classy joint kind either – think more two streets over, may-double-as-a-brothel kind. The car is a lot of fun, but not something you’d like to be seen coming out of – much alike the strip joint. Comparing the V6 mustang to the much more powerful SS Camaro is an unfair game – but having previously driven the V8 GT mustang, it’s worth drawing comparisons across the range where possible. The automatic gearbox in the SS is bearable, it’s a clear winner over the Mustang’s somewhat clumsy box. The Mustang feels like a better-designed car, as if actual engineers worked on it. Aesthetically, I think it looks fantastic – it’s something I’ve considered buying in the past. The Camaro looks like a group of engineers were asked to fit something to child’s drawing. Both cars in V8 guise have the familiar muscle car roar – not my first choice, preferring a subtler note. I decided some months ago not to go down the muscle car route – fearing that in the longer term I’d have been disappointed. Reviewing that decision now, I’m very glad I decided to buy another E46 BMW M3, and not compromise on something else – but think I’d still have been quite happy in a muscle car. The Mustang would be my car of choice – V6 or V8, as long as it’s a manual.