When flights from Boston to San Juan present themselves for $180, it’s hard to resist – I couldn’t. With the flights setting the precedent of a cheap getaway, it was straight to AirBnB for accommodation. While I was completely set on a $60/night rental with a distant coastal view, the pictures of Juan’s beachfront apartment, for a little more, that sold me.

I ended up staying in Luquillo, 40 minutes drive east of the capital, San Juan. Luqiullo is a small Puerto Rican town with little tourism. The apartment itself was situated on the edge of the town, next to a stretch of beautiful virgin beach several miles long.

It’s possible I’ve been living in the prim & proper confines of the American Northeast for too long, for at first the apartment complex appeared to be nestled amongst a slum. The building was surrounded with high walls topped with barbed wire, and had constant security.

After wandering about, turns out these seem pretty typical Puerto Rican houses. Certainly not a plush neighbourhood, but besides the telltale sign of a pair of trainers tossed over electricity wires outside a house which was more grand than most, I saw no advert signs of crime. Still, it seems the international drug trade speaks the same language wherever one travels!

Driving in Puerto Rico doesn’t seem much different to in Massachusetts – perhaps a little more aggressive, but I’ve seen worse. Roads off the beaten track are narrow – something not often seen in the US.
The Economy rental car from Alamo was awful, as it’s supposed to be – it’s a cheap car! 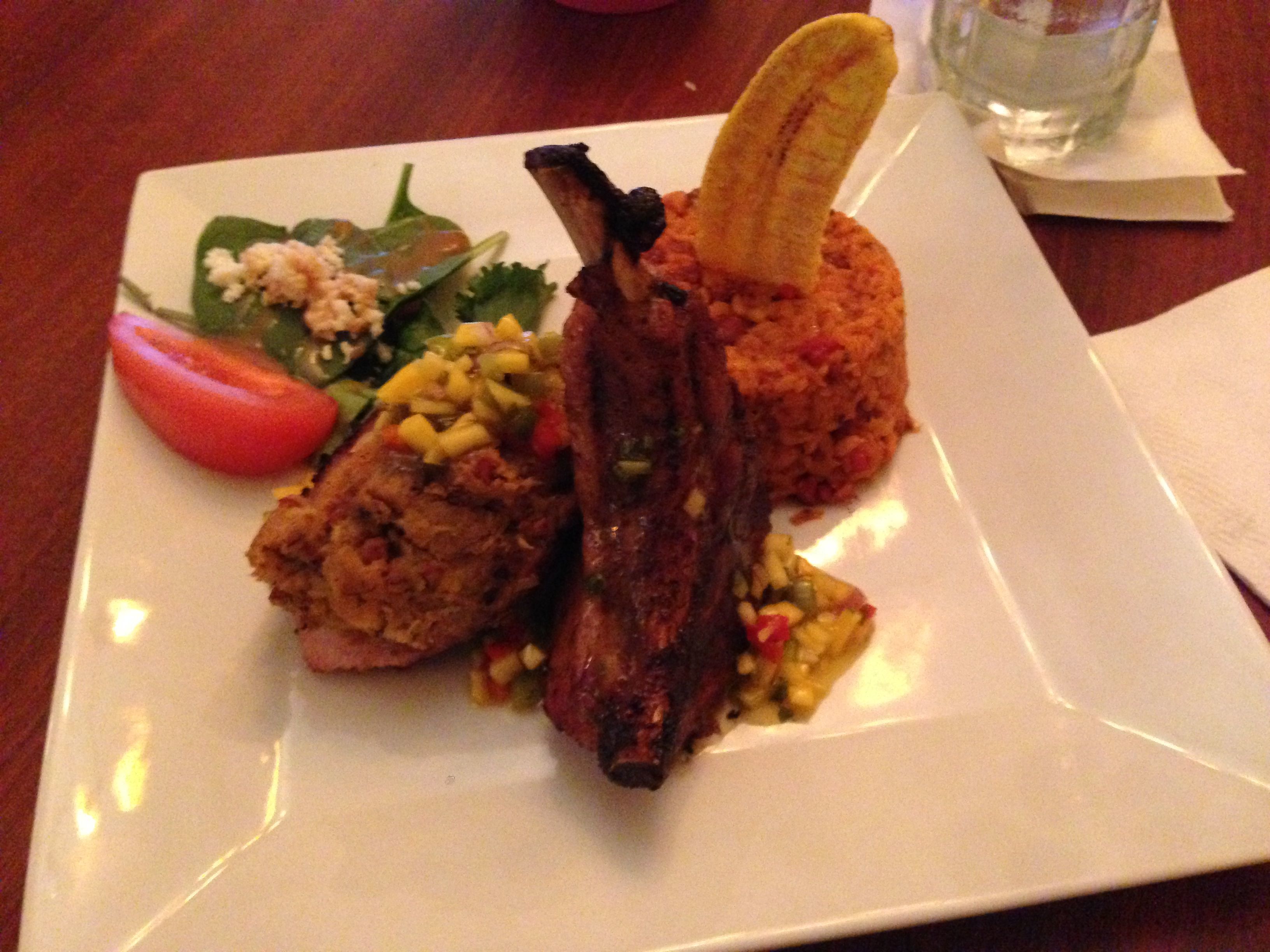 It becomes apparent pretty quick Puerto Rico indeed has it’s own very distinct cuisine. A lot of plantain, pork, and surprisingly little fish. I had four meals worth mention. The first was in the old town of San Juan, where I had fantastic fried Chorizo in rosemary wine reduction, and plantain stuffed with cod which was a little salty. Two were in the Luquillo Kioskos – a series of 50 or so famous restaurants by Luqiillo Beach right off Rt. 3, and on both occasions I had a delicious stuffed pork dish – I’d recommend Kioskos #2.

Lastly, brunch in El Vista in Fajero was delicious. This hidden gem sits on a rooftop terrace with views of the big lagoon, which the Bio Bay tours travel into. The proprietor makes the effort to get to know every guest by name, and I had a fantastic fruit platter made with produce from the garden on-site.

One of the things I was most excited to do on this trip for me was snorkelling in Coral for the first time since a trip to the Seychelles when much younger. Unfortunately, it wasn’t to be!
Luquillo has a fantastic surfing beach, and a Blue Flag swimming beach. Blue flag beaches, while perfectly suited to families looking for some place safe to let their twelve children swim, offer little in the way of snorkelling. Both reefs I found in Luquillo were small and mediocre compared to what I’d experienced in the Seychelles. I’d also travelled down the coast to Seven Seas Beach, which also proved disappointing. As much as I dislike guided tours, I’d recommend one for any hope of snorkelling.

Speaking of guided tours – another incredible part of the trip was a visit to the Bioluminescent bay. Micro-organisms illuminate the bubbles created by running one’s hand through the water after dark in incredible blue-green streak. This presents a true once-in-a-lifetime experience. Sure, the bioluminescence is cool – but what’s really interesting is what happens when you take a sample size of Americans, and force them to exercise. Sure, kayaking through the narrow mangrove channel sounds fun in theory – but there are tens of tour companies, each taking 30 tourists through the channel. Chaos ensues, since most seemingly have never sat in a Kayak. Tempers flare, bitter inter-kayak battles ensue. Relationships break, marriages falter.
All because of a little bit of exercise. Well worth the $50 to see!

El Yeunque National Park was my first time visiting a tropical rainforest – the only in the US National Park Service. It’s a short drive from Luquillo, trailheads have ample parking, trails are laid with concrete paths and are well marked. I started with Big Tree Trail, just off PR191 at km marker 10. This is a steeply undulating path toward La Mina Falls. The trail was busy even on what appeared to be a quiet day.

The falls are a nice place to take a swim, but can often be very crowded – there’s much nicer pools further along. From here, most seem to travel back on the same route, to save a later trek by road – but a far nicer trail, La Mina Trail, continues straight ahead. This follows the river uphill, and returns to PR191 at km marker 12. From here, it’s a short downhill walk by the road back to the original trailhead – you do the math!

The Old Town in the island’s capital was the nicest town I’d seen on the island. The town is surrounded by a historic defensive town wall, and features cobbled streets, courtyards and a large variety of quality restaurants. Parking was only $5 for a couple of hours, right in the city centre!